Signing of Partnership Agreement for Cohesion Policy Funds for 2021-2027

The partnership agreement is an overarching document that defines the strategy and investment priorities for the Cohesion Policy funds – including ERDF, ESF+, the Just Transition Fund and the European Maritime Fisheries and Aquaculture policy fund (EMFAF). The Agreement presents a list of National and Regional Programmes adapted to the needs of the country for implementation of the investments on the ground.

Now formally launched, this Partnership Agreement is an important step in securing these impactful EU funds in Ireland. By boosting innovation and competitiveness, enabling digital transformations in the economy, investing in social inclusion, skills training and employment and in the green transition, these funds will help Ireland address regional disparities.

Commenting on the adoption of the Partnership Agreement, Minister McGrath said:

“I am delighted to launch Ireland’s Partnership Agreement today with Commissioner Ferreira. Next year, Ireland will celebrate fifty years of membership of the European Union. Communities throughout Ireland have benefitted from membership of the European Union and from EU funding.  Cohesion funding has been at the heart of that process and has underpinned Ireland’s economic and social development through that period. It is a key policy tool to stimulate economic growth, promote social cohesion and to reduce disparities between the regions of the EU.”

“Following today’s adoption of the Partnership Agreement, Ireland will receive support to further develop its economy in a fair and green manner, ensuring that no region is left behind. Since its accession to the EU in 1973, the country has benefitted from Cohesion Policy funds to support its transformation to a modern, innovation-led economy. Support under this new Partnership Agreement will continue to boost innovation across Irish regions, while also contributing to the green transition and to the quality of life in Irish towns. Ireland has a far-reaching smart, green and digital future ahead.” 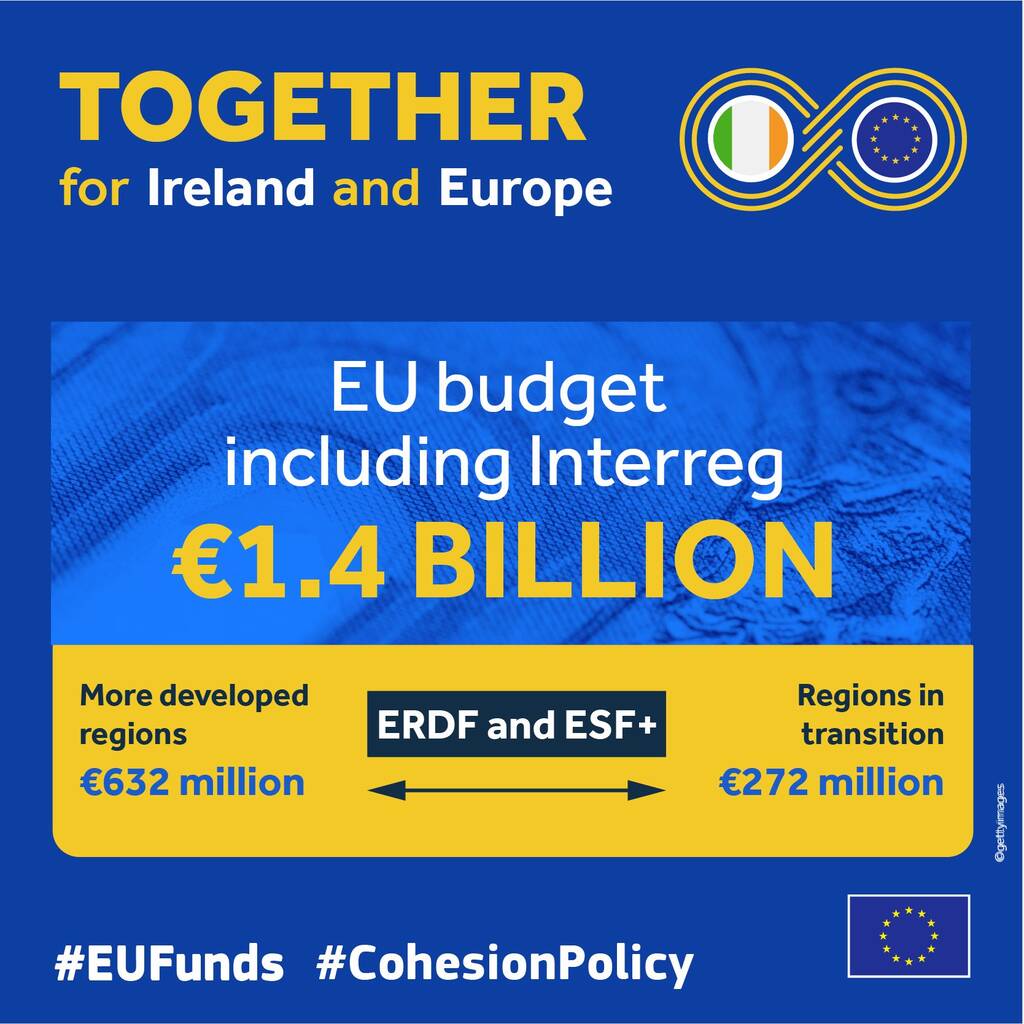 EMRA welcomes this Partnership Agreement that will see Ireland benefit from €1.4 billion in Cohesion Policy funds from the European Union for the 2021-2027 period.

The EU Cohesion Policy programmes covered in the Partnership Agreement are:

When the requirement for match funding is included, the full value of the programmes supported by these allocation amounts to nearly €3.5 billion.

Within the new programming period, EMRA will be the Managing Authority for the new EU Just Transition Fund. As such, EMRA will be involved in the management and implementation of the fund in Ireland.

Ireland is set to receive up to €84.5 million from the EU Just Transition Fund. With the Government of Ireland’s match funding using Exchequer resources, up to €169 million will be available for investment.

Read more about this fund on our page here or on eufunds.ie/home/our-funds/just-transition-fund/.

Read more about the signing of the Partnership Agreement from: